As part of the Corinth Square Shopping Center CID, the City Council and CSN Retail Partners LLC signed a Development Agreement which establishes the allowable uses of the additional sales tax funds.  Under the Agreement the Developer is  required to start at least one Signature Project within 2 years from the approval of the Agreement.  The Signature Project must be completed within 5 years. The developer must complete another CID project within 5 years of the completion of the last CID project or within 2 years after the full reimbursement of the last completed project.

The Corinth Square Signature Projects are limited to redevelopment of the former Tippin’s building (Project A1: Lot E) or façade improvements to the main Corinth Square Buildings (Project A2). Both projects include improvements to the area around the main buildings. This includes enhanced pedestrian walkways, new irrigation system, new permanent planters, benches, trash receptacles, bike racks, and increased landscaping.  The developer is eligible for reimbursement of allowable project costs associated with these two Signature Projects.

Additional reimbursable target projects in the Corinth Square CID are Project B (Town Square), Project C (Buildings C, D & G Modifications), and Project D (Other Corinth Square Redevelopment). See Exhibit C of the Development Agreement for more information regarding the allowable projects.  In addition to target projects, the developer is also eligible for tenant incentive and improvement projects as outlined in the Development Agreement.

The City has approved one amendment to the Corinth Square Shops Community Improvement District Development Agreement.  On November 21, 2011, the City Council voted to approve an Amendment to modify Exhibit C to include Project B2: Johnny's and Project B3: Lot H - Arby's.  Click Here for a copy of the amendment.

How is the Additional 1% CID Sales Tax Collected and Used

How much Revenue has the CID generated?

The chart below provides a graphic representation of the monthly CID sales tax collected. Please note the graph starts on March 2011, because sales tax receipts are received two months after which they are collected from the retail establishment. This allows each retailer time to file the sales tax report and processing time for the Kansas Department of Revenue.

The chart below shows the yearly Prairie Village Shops CID sales tax revenue received by the City from the Kansas Department of Revenue. 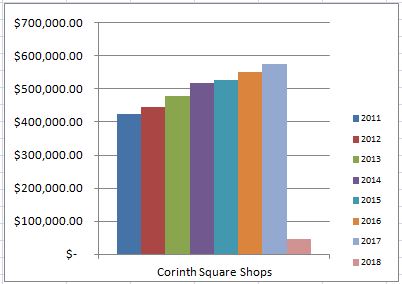 How much has been spent on Developer CID projects and associated costs?

Under the Development Agreement the Developer may also submit for reimbursement of interest from the time the expense occurred to when the expense is reimbursed with CID funds. The interest is simple interest based on prime plus an additional 2%. Tenant Improvement Projects are not eligible for interest reimbursement.

The chart below contains the approved Developer Reimbursement Requests. A copy of the approved request can be viewed by clicking on the document link below.

**Reimbursement request has been submitted, reviewed, and approved for payment, but funds are not currently available for reimbursement.  Payments will be made as sales tax revenues are received in the CID Fund.

Does the City of Prairie Village receive any Corinth Square Shops CID funds?

Under the Developer Agreement the City receives CID funds for an annual administration fee, reimbursement of legal and technical assistant costs, and reimbursement of costs associated with the construction of a public trail along Somerset Road.

The annual administration fee is used to offset costs the City incurs related to the tracking of CID funds, administration of CID projects including review of the Developer Reimbursement Requests and ensuring construction is completed according to the approved plans. From time to time, the City incurs costs associated with legal review of documents and is also eligible for reimbursement of these costs.

Under the Development Agreement the City may also submit for reimbursement of interest from the time the expense occurred to when the expense is reimbursed with CID funds. The interest is simple interest based on prime plus an additional 2%.

The chart below summarizes the City reimbursement requests which have been approved and paid with the Prairie Village Shops CID funds.

Finally, under the terms of the Development Agreement $125,000 has been identified for the construction of a public trail along Somerset Road. To establish funds for construction, $50,000 per year is set aside until the $125,000 balance is reached. The City will then use these funds to construct the trail and any unused funds will be returned to the Corinth Square CID Fund for use for CID Developer Projects.

The chart below summaries the allocation of funds under the Trail provision of the Development Agreement. The City has not submitted for reimbursement of any trail related costs at this time. Once the construction of the trail has been completed and the project costs are finalized the City will request reimbursement from the funds shown below.

Want to receive updates to this project? Click Here

June 12, 2013 - The Hen House Renovations are complete.  A ribbon cutting ceremony was held on June 12th.  The Project Page Information has been updated to include information on Revenue Generated, Developer Reimbursements, and City Reimbursements.

February 27, 2012 - If you have not noticed, the former Tippins building demolition has been completed.  Construction of the new CVS building will begin in the coming weeks.  Construction is anticipated to be completed for an August 2012 opening of the CVS.  The CVS project is not funded with Community Improvement Funds.

There will be a lot of activity at the Corinth Shopping Center this spring and summer with two additional projects getting underway.  The first will be parking lot improvements.  This will involve consolidation of the two entrances along Mission Road into a single centered entrance, new lighting and landscaping.  The second project will be façade improvements for the main building.  The façade improvements will be completed by this fall.  These two improvements are being funded with Community Improvement Funds.

All of this construction will cause some inconvenience, so please continue to patronize the Corinth merchants.  Once the construction is complete, Corinth Square will have a brand new look to enjoy for years to come.  Check out the design plans.

September 14, 2011 - At their September 6th meeting, the Planning Commission approved with conditions the site plan, sign standards and the preliminary and final plats for the Corinth Square Improvements. Improvements will begin in spring 2012.