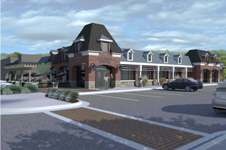 At the September 20, 2010 Council Meeting, the City Council approved the establishment of Community Improvement Districts (CIDs) at the Prairie Village Shops. The CIDs will impose a 1% sales tax for 22 years effective January 1, 2011. This will increase the sales tax rate at both shopping centers to 9.375%.

Under the Development Agreement, six separate projects are eligible for reimbursement from the Community Improvement District Funds.  The first project to be completed as a signature project is improvements to Mission Lane (Project A).  These improvements include reconfiguration of parking areas, additional landscaping, pedestrian amenities, etc.

The City has approved one amendment to the Prairie Village Shops Community Improvement District Development Agreement.  On October 15, 2012, the City Council voted to approve an Amendment to Exhibit F of the agreement modifying the required construction start date of the Mission Lane Improvements (Project A) from November 2, 2012 to May 2, 2013.  Click Here for a copy of the amendment.

How is the Additional 1% CID Sales Tax Collected and Use

How much Revenue has the CID generated?

The chart below provides a graphic representation of the monthly CID sales tax collected.  Please note the graph starts in March 2011, because sales tax receipts are received two months after which they are collected from the retail establishment.  This allows each retailer time to file the sales tax report and processing time for the Kansas Department of Revenue.

The chart below shows the yearly Prairie Village Shops CID sales tax revenue received by the City from the Kansas Department of Revenue. 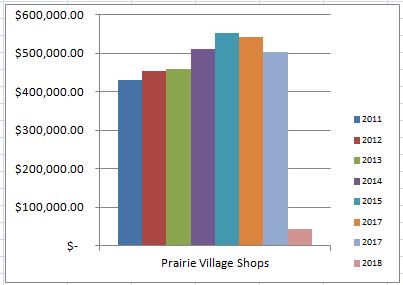 How much has been spent on Developer CID projects and associated costs?

Under the Development Agreement, the Developer may also submit for reimbursement of interest from the time the expense occurred to when the expense is reimbursed with CID funds.  The interest is simple interest based on prime plus an additional 2%.  Tenant Improvement Projects are not eligible for interest reimbursement.

The chart below contains the approved Developer Reimbursement Requests.  A copy of the approved request can be viewed by clicking on the document link below.

**Reimbursement request has been submitted, reviewed, and approved for payment, but funds are not currently available for reimbursement. Payments will be made as sales tax revenues are received in the CID Fund.

Under the Developer Agreement the City receives CID funds for an annual administration fee, reimbursement of legal and technical assistant costs, and reimbursement of costs associated with the construction of a public trail along Tomahawk Road.

The annual administration fee is used to offset costs the City incurs related to the tracking of CID funds, administration of CID projects including review of the Developer Reimbursement Requests and ensuring construction is completed according to the approved plans. From time to time, the City incurs costs associated with legal review of documents and is also eligible for reimbursement of these costs.
The Annual Administration fee is calculated on a percentage basis of 2.5% of the net CID sales tax received from the Kansas Department of Revenue. The Annual Administration fee cannot exceed $20,000 per year.

Under the Development Agreement the City may also submit for reimbursement of interest from the time the expense occurred to when the expense is reimbursed with CID funds. The interest is simple interest based on prime plus an additional 2%.

The chart below summarizes the City reimbursement requests which have been approved and paid with the Prairie Village Shops CID funds.

Finally, under the terms of the Development Agreement $350,000 has been identified for the construction of a public trail along Tomahawk Road. To establish funds for construction, $50,000 per year is set aside until the $350,000 balance is reached. The City will then use these funds to construct the trail and any unused funds will be returned to the Prairie Village CID Fund for use for CID Developer Projects.

The chart below summaries the allocation of funds under the Trail provision of the Development Agreement. The City has not submitted for reimbursement of any trail related costs at this time. Once the construction of the trail has been completed and the project costs are finalized the City will request reimbursement from the funds shown below.

May 2, 2014 - Improvements at the Prairie Village Shopping Center will continue throughout 2014.  Construction of the new retail building is complete, including the parking lot and landscaping.  Starbucks is now open in the new building.  Einstein Bros. Bagels will take possession of the former Starbucks and Dolce Bakery premises with an anticipated opening in August 2014.  The Mission Lane Improvements and culvert repairs began in late April.  The improvements are scheduled to be completed using "sequencing" rather than being performed in three distinct phases.  The advantages are twofold; first it will allow Mission Lane to remain open throughout the majority of the construction and second it will allow the entire project to be completed a couple of months ahead of the timeframe previously envisioned. The work is expected to wrap up in early to mid-August as opposed to the October timeframe; however, weather/unforeseen conditions may play a factor.

March 5, 2014 - Construction of the new retail building (Project F) is complete.  The parking lot and landscaping around the building should be completed within the next 30 days, weather permitting.  Starbucks took possession of its premises in the new building on March 3, 2014 and is expected to open sometime in May.  Einstein Bros. Bagels will take possession of the current Starbucks premises as well as the former Dolce premises as soon as Starbucks relocates to the new building with an anticipated opening in August.

The Mission Lane Improvements (Project A) and Culvert Repairs (Project C) are anticipated to commence, weather depending, in April 2014. Hen House decided not to expand the grocery store in the Village Shops. The improvements on Mission Lane had to be modified to remove the expansion area of Hen House and were resubmitted and approved by the Prairie Village Planning Commission on March 4, 2014. The construction plan is to work on the Mission Lane improvements in three phases, North end, South end then middle section (Hen House). Each phase is estimated to take 60 days to complete. The estimated completion date for the entire project is November 2014.

September 20, 2013 - Improvements are underway at the Prairie Village Shopping Center. Construction of the New Retail Building (Project F) has begun. Substantial completion of the new retail building and delivery to the respective tenants is anticipated for mid-January 2014. The landscaping/sod and fountain may be deferred to spring if winter weather arrives early. Starbucks is anticipated to open in their new building sometime in April 2014.

Originally the new retail building and the Mission Lane Improvements (Project A) were anticipated to be completed in 2013. Due to unforeseen delays and approaching winter weather, it will not be possible to complete both projects in 2013. It is anticipated that the Mission Lane Improvements will commence in March 2014 (dependent on weather) and be completed by September 2014.

May 7, 2013 - Construction has begun with the burying of utility lines.

November 7, 2012 – At the November 5th City Council meeting, the City Council did not approve the second amendment to the Development agreement related to amending Section 2.02 (A) removing the requirement for the construction of a pedestrian trail along the east side of Mission Lane. The developer had tentatively agreed to install a pedestrian trail with a minimum width of 6 feet. The City Council rejected the proposal with a vote of 7 to 5 in favor of a minimum width of 8 feet.

At the November 6th Planning Commission meeting, the Planning Commission approved the Mission Lane improvements that included a 6 foot pedestrian trail. Also approved was the Site Plan for the expansion of Hen House and the construction of a new commercial structure in the place of the existing Waid’s building. The Conditional Use Permit for a drive-thru facility was also approved.

November 2, 2012 - On October 15, 2012, the City Council voted to approve an Amendment to Exhibit F of the agreement to modify the required construction start date of the Mission Lane Improvements (Project A) from November 2, 2012 to May 2, 2013.  A copy of the amendment can be found by clicking here.  The City Council at the October 15th meeting also discussed the proposed pedestrian/trail easement along Mission Lane and directed the developer to look at the possibility of providing such an easement on Mission Lane and present their findings at the November 5th City Council Meeting.  Related to this item, the City Council tabled the associated PV Shops Final Plat until the easement issue is resolved.

The City Council will consider a second amendment to the Prairie Village Community Improvement District Development agreement related to amending Section 2.02 (A) removing the requirement for the construction of a pedestrian trail along the east side of Mission Lane.  The Developer has prepared a response to the City Council's request to explore the possible width of a pedestrian easement along Mission Lane.  For a copy of the developer's proposal for the pedestrian easement along Mission Lane and the associated draft Second Amendment to the Development Agreement for the Village Community Improvement District click here.

The City Council will consider acceptance of the easements and ROW along with the vacation of Mission Lane and Prairie Lane on October 15, 2012 at 7:30 p.m.

The Planning Commission continued the remainder of the Site Plan (PC2012-113) and the consideration of the Conditional Use Permit for the Drive-Thru Service Window at 6920 Mission Road (PC2012-08) until the November 6, 2012 meeting.

August 24, 2012 - The Developer, Lane4 Property Group, has submitted conceptual drawings of the proposed improvements to Mission Lane and the drawings for the construction of the Waid's replacement building.  Images of the plans can be found by clicking here.

In addition to the site plan drawings and elevations for the replacement building, the developer will be platting the subject property.  For a copy of the submitted plat documents, click here.

For questions or to provide written comment to the Planning Commission, please contact Dennis J. Enslinger at 913-385-4603 or denslinger@pvkansas.com.

August 17, 2012 - On August 10, 2012, the property owners, PV Retail Partners, LLC submitted applications for Site Plan approval for Project A (Mission Lane Improvements), Project D (Hen House expansion), and Project F (Demolition of Waid's Building and construction of a new multi-tenant building.  The new multi-tenant building will include a drive through facility.  Staff will post drawings of the proposed projects the week of August 20th.