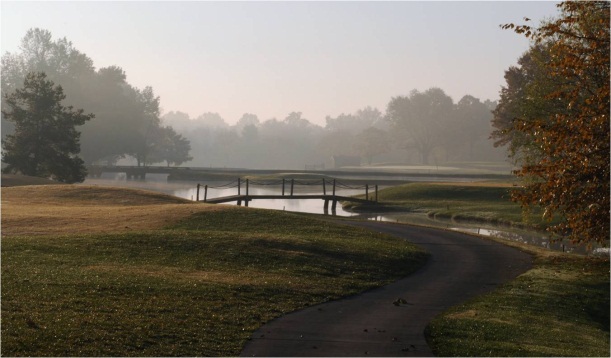 A public announcement was made on February 19, 2015 at Meadowbrook Golf and Country Club by VanTrust Real Estate, LLC along with Johnson County Government, the City of Prairie Village, and Johnson County Park & Recreation District regarding their intent to work together on a redevelopment project including a significant opportunity for a regional park in Northeast Johnson County.

The proposed plan preserves approximately two-thirds of the green space which would be owned, operated, and maintained as a county park by Johnson County Park and Recreation District. Substantially all of the park acquisition, park improvements, and other public improvements would be funded by the taxes generated by the private development. The remaining 42 acres of the approximate 136 acre site would be developed by VanTrust, a Kansas City-based national developer of residential communities and commercial projects, and would provide multiple housing options.

The conceptual site plan from Spring 2015 for the proposed Meadowbrook Park and redevelopment is available for download here (PDF).

A tentative calendar of events related to the Meadowbrook redevelopment is available here
(PDF, updated 3/31/2016).

As of July 20, 2015, frequently asked questions about the project are available here.

As of October 10, 2015, frequently asked questions about the project are available here.

5/23/2016 -  With a ceremonial turn of the soil, community partners joined to celebrate the official start of construction the Meadowbrook redevelopment in Prairie Village. Read the news release here. 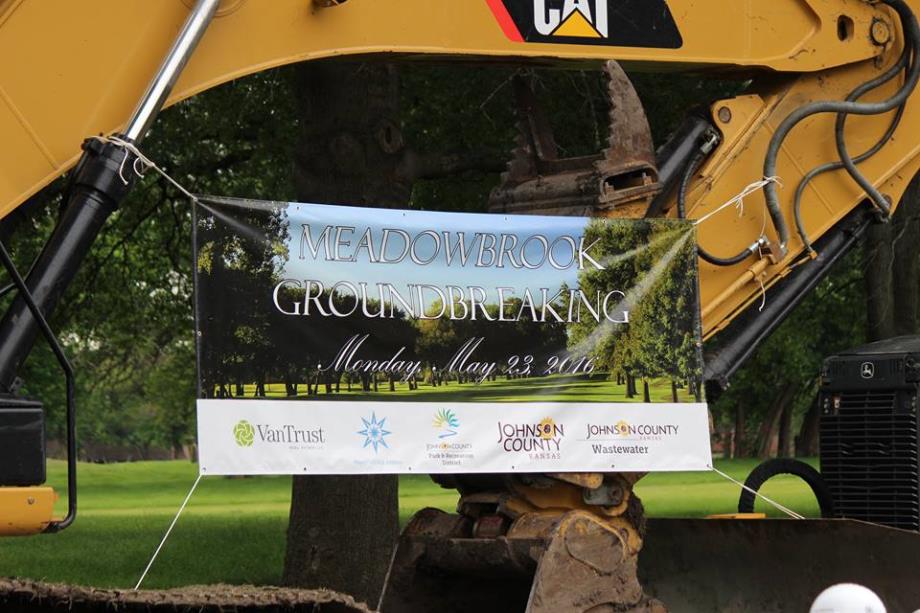 The following items were presented to the planning commission:

12/21/2015 - At the Monday, December 21 City Council meeting, City Council reviewed and approved the redevelopment project plan (TIF), park site gift agreement, and the developer agreement. With these approvals, the Meadowbrook redevelopment and park have taken significant steps forward. It is anticipated that the project will break ground this spring, with the estimated project completion in 2019.

The City Council unanimously approved the rezoning of the property from R-1a (Single Family Residential) to MXD (Mixed Used District) and CP-2 (Planned General Business District). The rezoning will allow the redevelopment of the southern portion of the property to include single-family housing, apartments, an inn, and retail shops.

On a 10-2 vote, the City Council also approved the preliminary master plan for Meadowbrook Park. The proposed plan includes iconic gardens, several miles of walking trails, destination playgrounds, tennis and pickleball courts and more. Significant discussion took place over the decision to locate a street connection to the development from Roe Avenue. The approved plan includes the Roe Connection offset slightly from 91st Street. The plan is available to view here (LINK) and will go to the Johnson County Park and Recreation (JCPRD) Board and Johnson County Commissioners for approval. 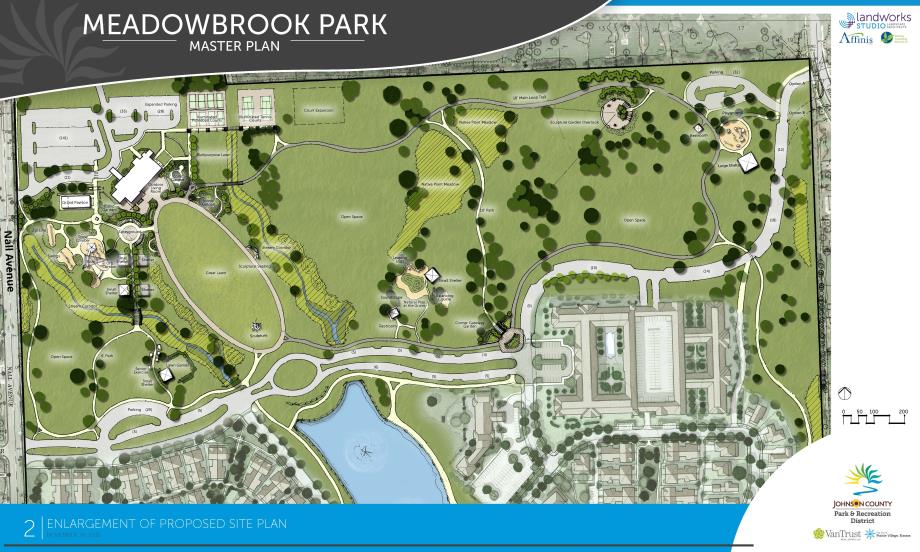 11/16/2015 - Landworks Studio presented the latest version of the Meadowbrook Park Master Plan to the City Council:

Proposed revision to the northeast corner:

11/12/2015 - The Planning Commission recommended approval for Van Trust Real Estate’s preliminary development plan as well as the rezoning request to have a portion of the property rezoned from single family residential to mixed use. The following items were presented to the planning commission:

10/12/2015- The conceptual layout for Meadowbrook Park is now available:

10/8/2015 - The review period for Johnson County and the Shawnee Mission School District has expired, thus the redevelopment district is established.

9/29/2015- The Johnson County Park and Recreation District (JCPRD) is holding the first of two public meetings as part of its planning process to develop a park master plan for the former Meadowbrook Country Club.

The initial meeting will be held from 3:30 to 7:30 p.m. on Tuesday, Sept. 29, at the Meadowbrook site located at 9101 Nall Ave., Prairie Village, KS.  The public is invited to come and go at any time during the open house. 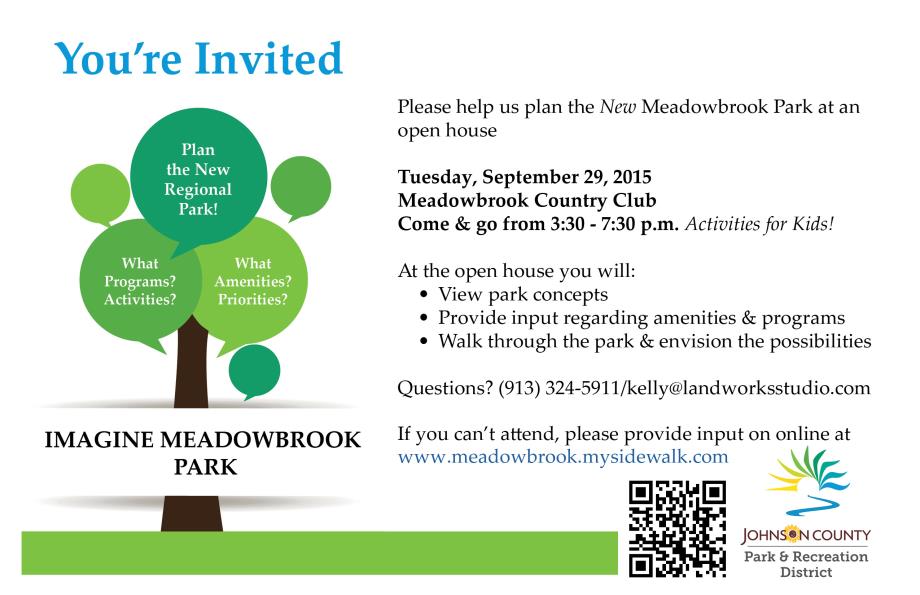 5/7/2015- The City commissioned the appraisal to determine the fair market value of the proposed park property. The developer (VanTrust) has indicated that they are willing to sell at a value below the appraised value.

4/21/2015- Representatives from Van Trust and Legend Senior Living shared a presentation regarding the proposed senior living facility at the April 20, 2015 Council Meeting. A copy of the presentation will be available for download in the future.

Gary Anderson, the City's Bond Council, made a presentation regarding the financing mechanism at the April 20, 2015 Council Meeting. The presentation is available for download here (PDF).

3/12/2015- Members of the public were invited to join representatives from VanTrust Real Estate, Johnson County Government, Johnson County Park & Recreation, and the City of Prairie Village for public open houses related to the proposed plan for the redevelopment of Meadowbrook Golf & Country Club in March.

A video presentation was made at the open houses and may be viewed here (link will open a new website).

A presentation was given at the public announcement and is available for download here (PDF).

The following documents were available at the open house: