Wassmer Park is named after former Mayor Laura Wassmer. She served on the Prairie Village City Council for 17 years before being elected Mayor in 2015, a position she held until January 2019. During her tenure as an elected official, Wassmer influenced many areas of the City, including the parks and trails system. 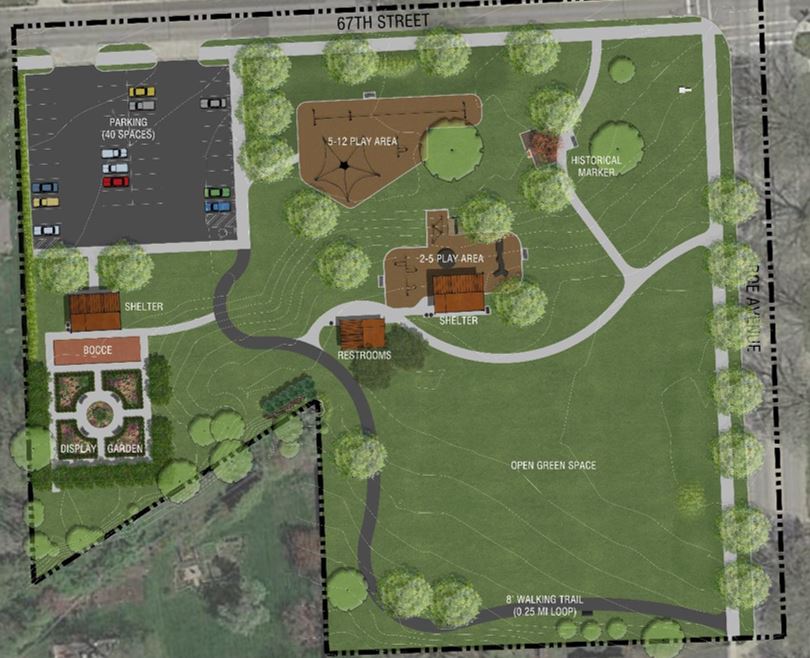 The park, which is located on the site of the former Faith Lutheran Church at 67th Street and Roe Avenue, features playground equipment, a zip line, a bocce ball court, display gardens, green space and two park shelters.

October 18 - The project is almost complete and it feels like an open park! However we have a few details to finish up before the dedication on October 26th.  Flowers to be planted, benches and tables to be installed, the parking lot to pave and solar panels to install.  These activities will be taking place next week. If you are at the park, please remember it is still an active construction site.

August 19 -  Shelters are up and will soon be sealed to protect the wood feature.  The restroom is being painted.  The solar panel project will be on the ground soon.  In the next week we should have completed zip line installation.  Park final grading is just around the corner.

July 12 -  Have you driven by today?  Playground equipment is arriving on site.  The restroom is framed in and shelters are arriving this month.  Crews are working on concrete trails this week.

June 21 - Crews are continuing work in the restroom and grading on site.

June 5 - Crews have completed framing the restroom and continue with indoor plumbing work.  The site work moves to grading (as weather permits) and the construction of the border ribbon around the upper playset has started.   To date, we have had a very rainy spring, and the contractor is working to stay on track with their schedule.

May 24 2019 -  Crews have started framing the restroom and poured the pads for the shelter.  Current weather conditions are causing a delay for the grading of the site; however the contractor continues progress on the restroom.

April 30 2019 - Crews are progressing with footings for the structures and utility hookups along with grading of the park site.

April 19 2019 - Crews on are on site prepping the property for the shelter locations and the restroom.  These pads and hooking up utilities will be the first order of business.

April 1 2019 - Crews will start soon with some basic survey to kick off construction.  Once grading is complete at Porter Park, they will shift their efforts to Wassmer and grade the shelter and restroom pads.

March  2019 -The project has been awarded to Centric Construction and warm weather is finally upon us!  Expect to see crews out and about in late March to begin construction in Wassmer Park.

January 29, 2019 - The project is out to bid in conjunction with the restroom at Porter Park. Bids are to be received Friday, February 1st.

December 28, 2018 - The Governing Body directed staff to move forward with final design selections as noted during the council meeting. These included resident selections made during the public meeting on November 27. Residents selected between options for playgrounds, shelters, furniture and restrooms and to provide an additional connection to the display garden.  Final selections are noted below. Thank you to everyone who came to the public meeting.

November 2018 - November is a busy month for the North Park design. Staff met with the Tree Board to review the planing plan and the Parks and Recreation Committee to review the overall amenities in addition to the public meeting scheduled for November 27.

Please join us at a public meeting to weigh in on the park shelter, playground equipment, pathways, and more.

August 2018 - Public Works Maintenance Crews have stockpiled brick from the Faith Lutheran Church building demolition. Residents can come to the Public Works facility located at 3535 Somerset before August 31 to collect a brick as a memento for their personal collection.  Please note these are salvaged bricks and are not stacked, clean or in new condition.

May 2018 -  The Governing Body approved a merged concept for North Park.  This concept gives guidance on park amenities and general locations. The decision was made to defer placement of a fitness court at this time. 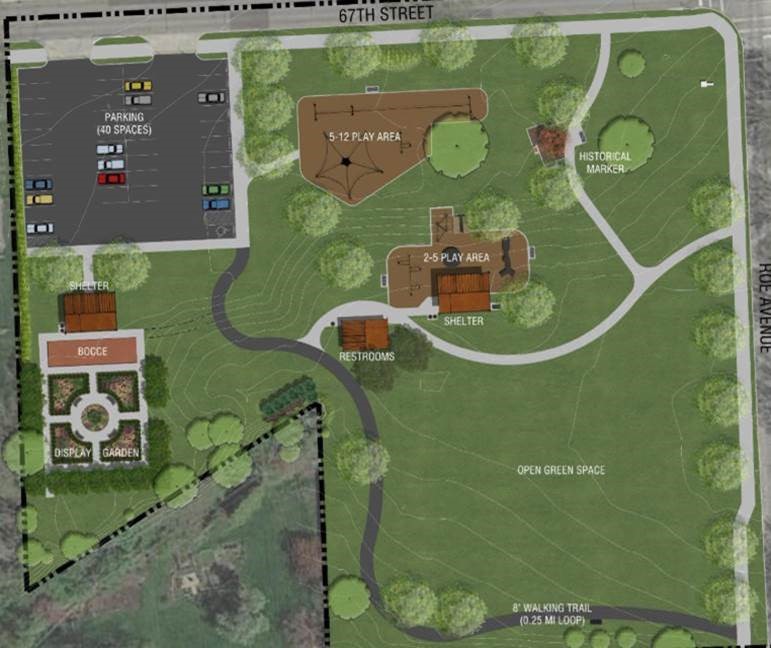 March 20 - Thank you for attending the public meeting!  The attendance and participation exceeded our expectations. Postcards were mailed out to over 650 residents and message boards placed at City Hall & 67th and Roe advertised the event. Participants received dots to place near their "favored" park amenities. These dots give the planning team guidance on the direction of the concept.  The boards can be viewed here (PDF).

In addition, the City is working with National Fitness Campaign (NFC) to integrate a fitness court  into our park system. Additional information on the court can be found here (YouTube). The last board shows the locations favored for the court with many comments focused on: 1) a central location and 2) being by the trail system.

March 6 - Public Meeting | 4:30 to 6:30 | Community Center
We want to hear from you! Come and share your ideas as we kick-off the park planning process. BBN Architects and Prairie Village city staff will be hosting an open house to gather your input on what this park needs and specific issues to consider. No plans have been developed at this point, but the consultant will share their site observations, along with an array of potential park uses to help spur the discussion. Make your voice heard on this valuable community asset!

In 2017, the City of Prairie Village purchased the former Faith Lutheran Church property at 67th Street and Roe Avenue in order to create a new park for its residents. The demolition of the old church is underway and a consultant, BBN Architects has been hired to design the new park.

This project is administered by the Public Works Department. Please contact Melissa Prenger, Sr. Project Manager (mprenger@pvkansas.com) if you have any questions or concerns.

September 2018 - The demolition contractor removed the parking lot on 9-6-2018  and will complete grading and seeding of the area as weather permits within the next week.

July 2018: Exterior Demo starts on Thursday July 5th.  This will be traditional demolition with equipment.  Demolition of the building is scheduled for the next four weeks.

January 2018 - The office of the City Clerk opened bids for the North Park Building Demolition. This phase of the project entails removal of the building, and the eastern parking lot. The building removal is scheduled to be completed in mid June.